On Effective Boards of Directors: Perspective from Mark Leonard of Constellation Software 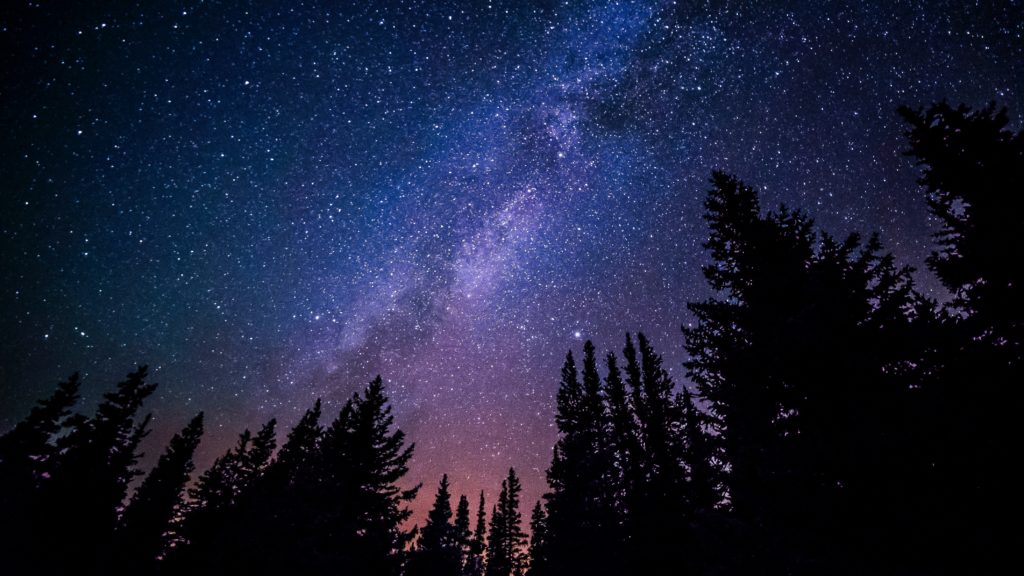 Our current policy is to invest all of our retained investor’s capital (and then some) when we think we can achieve our targeted hurdle rates. When we can’t find enough attractive investments, we plan to maintain our hurdle rates and build cash for as long as our shareholders and board will allow. We believe that long-term shareholders and boards should set those policies, which segues nicely into discussing shareholder democracy and the role of boards.

Almost half of our shares trade each year, which suggests that many of our shareholders are not long-term oriented. These traders are buying our shares because they hope they will be able to sell them at higher prices in three months or six months.

Another class of shareholders are indexers. They buy our stock because we are part of whatever index they are emulating. Their actions are formulaic. Despite the fact that they may be long-term holders, it is difficult to find someone to speak with at these indexing institutions and even if we do, they rarely know much about our company.

There is another class of long-term Constellation shareholders who invest time and effort to get to know our company and may even try to contribute to its growth and prosperity. We are fortunate to have a couple of dozen institutional investors, several hundred personal investors and several thousand employee shareholders who have taken this view. I’ll refer to these as “enterprising investors” (perhaps stretching the original definition). They are the groups that we consult when we need advice and input from engaged shareholders.

One of the ways that our enterprising investors can contribute is by helping find and elect excellent Directors. Shortly after our IPO we started asking our major institutional shareholders to suggest people from their ranks for our board. A couple of enthusiastic investment managers tried to convince their organisations to take that step, but the institutional barriers to them being Directors are apparently insurmountable.

We have also asked our enterprising investors to suggest board candidates from outside of their ranks. This has not been very productive so far, probably because I didn’t do a good job of explaining the characteristics of an ideal Director from our perspective. A couple of years ago we started creating a screen for Director searches – I’ve appended it to this letter so that our enterprising investors will have a better sense of who we are seeking. If you know anyone who would rank well vs the screen, and if you think they would be interested in being a Constellation Director, please let us know.

Qualified and competent Directors are very rare, and not surprisingly, the track record of most boards is awful. According to the 2017 Hendrik Bessembinder study of approximately 26,000 stocks in the CRSP database, only 4% of the stocks generated all of the stock market’s return in excess of one-month T-Bills during the last 90 years. The other 96% of the stocks generated, in aggregate, the T-bill rate over that period. This means that 4% of boards oversaw all the long-term wealth creation by markets during that period. Even more disturbing, the boards for over 50% of public companies saw their businesses generate negative returns during their entire existence as public companies.

This governance problem is well understood, and the tools-du-jour for fixing boards are Director independence, diversity, and term limits. These tools are a great starting point when you are dealing with most public companies. However, when you are dealing with a high-performance company, I don’t think governance should be the key role of the board. Governance is still necessary, but it is not sufficient. Helping extend the extraordinary track record of building intrinsic value should be the board’s primary function. You are unlikely to achieve that by replacing their proven and obviously very rare Directors and Officers with new ones who are statistically unlikely to have ever experienced anything like consistent high performance.

The FTQ have a similar proposal on this year’s ballot. We thought we had addressed their primary concerns prior to the motion being submitted, so we asked their proxy advisor to withdraw it. They have refused. Our formal response to the proposal appears in our proxy. Jamal and I are once again lobbying our institutional investors to vote against this proposal. We hope you’ll vote against the FTQ’s resolution and in accord with management’s recommendation at the AGM again this year.

We recently received another challenge to our board practices. This time a significant shareholder (holding hundreds of thousands of Constellation’s shares) expressed concern about extended board tenures and a preference for “board refreshment”. They proposed that we consider limiting board tenure to 10 years. I appreciated them consulting with us directly, rather than just putting it on the ballot as a shareholder proposal. I thought I’d respond to them as part of this letter so that all shareholders can see how we think about Director selection and tenure.

We believe that when you limit a competent Director’s term, you limit their opportunity to learn and hence to add value.

There was a 1994 peer-reviewed journal article about the role of deliberate practice in becoming an expert (Ericsson & Charness). The concept was popularised and extended by Malcolm Gladwell in his book “Outliers”, as the 10,000 hour rule. I understand that you don’t need 10,000 hours of deliberate practice to be able to fire a CEO who has his hand in the till or is abusing employees. I’ll refer to this as the “governance” role of Directors. However, I also think there’s something to be said for Directors intently studying an industry and a company over a period of many years to acquire relevant expertise so that they can contribute more than just governing. I’ll refer to this as the “coaching” role of a Director.

In some instances, you are fortunate and can find Directors like Mark Miller and Jeff Bender who have 10,000 hours of relevant experience. They were master practitioners of the VMS craft long before they were appointed to the Constellation board. For most Directors, however, learning about VMS and Constellation’s particular approach to VMS, is a long journey. A couple of the outside Directors remarked how humbling it was to have these insiders on our board, because Jeff and Mark had so much context, experience and nuance to bring to most board discussions.

Our outside Directors spend about 30 hours in board meetings each year, and let’s assume preparation time doubles that. For an especially engaged Director, committees, special projects and extra-curricular Constellation-related activities might drive their time with us up to 200 hours per year. At 200 hours per year, and if you believe the 10,000 hour rule, then this especially engaged Director needs to put in 50 years on the job to offer deeply contextual expert level coaching.

Some prospective Directors don’t have the appetite or incentive to invest 10,000 hours to make the transition from a monitoring/governing role to a coaching/nurturing role. Most prospective Directors are simply too old to make that journey. Unfortunately, that means that the default role for most Directors is as a governor not a mentor. Some investors find that acceptable. I’d argue that governing is table stakes. Coaching and talent nurturing are the places where Directors can make a significant contribution and help a company become part of Bessembinder’s 4%.

Simple math suggests that if a Director is not from the industry or the company, then they have no hope of coaching and nurturing unless they start in the Director job when they are young. Ideally we’d like to get them in their 40’s or 50’s and keep them for 30 or 40 years or until their health deteriorates. We certainly don’t want to kick them out after they’ve served for 10 years.

We’ve been searching for great Directors for years. We’ve gone on long campaigns to land individual candidates whom we admire. One observation from those frustrating pursuits is that a lot of high quality people don’t want to be Directors. They may be intrigued by the company and the managers and the business philosophy. Despite that, the “policing” responsibility is an unpleasant one, and the prospect of investing a huge amount of time to learn the business and win management’s trust and respect is daunting.

There are a number of reasons people serve on boards: the halo effect of being associated with a good company, compensation, curiosity, and a desire to give back. However, I can think of only two really compelling reasons why a high-quality candidate would want to serve on a board and commit hundreds of hours per year to the task: 1) it is a way to invest a significant portion of your net worth and be able to watch it closely, and 2) you can learn and apply those learnings to your own career and investments.

I have difficulty forecasting long-term growth in Constellation’s intrinsic value per share that exceeds 12% per annum. For many Directors who are adept capital allocators, that is insufficient to justify investing a significant portion of their net worth. For them, the first compelling reason doesn’t apply.

Only a tiny number of CEO’s/Owners/Managers and some academics are going to want to study Constellation’s decentralised multiple small business unit model for application in their own careers. That suggests the second compelling reason creates even fewer candidates.

The overlap in the Venn diagram between high quality Director candidates and those that have a compelling interest in serving as a Director is tiny. Making Director tenures shorter, or limiting candidates to a particular gender, race, or religion, just exacerbates this situation.

The current movement to limit Director tenure makes great sense if you think your investee company is poorly governed. However, if you think the governance is good, then limiting Director tenure hurts the company. It is analogous to firing a high-performance employee on their tenth anniversary. 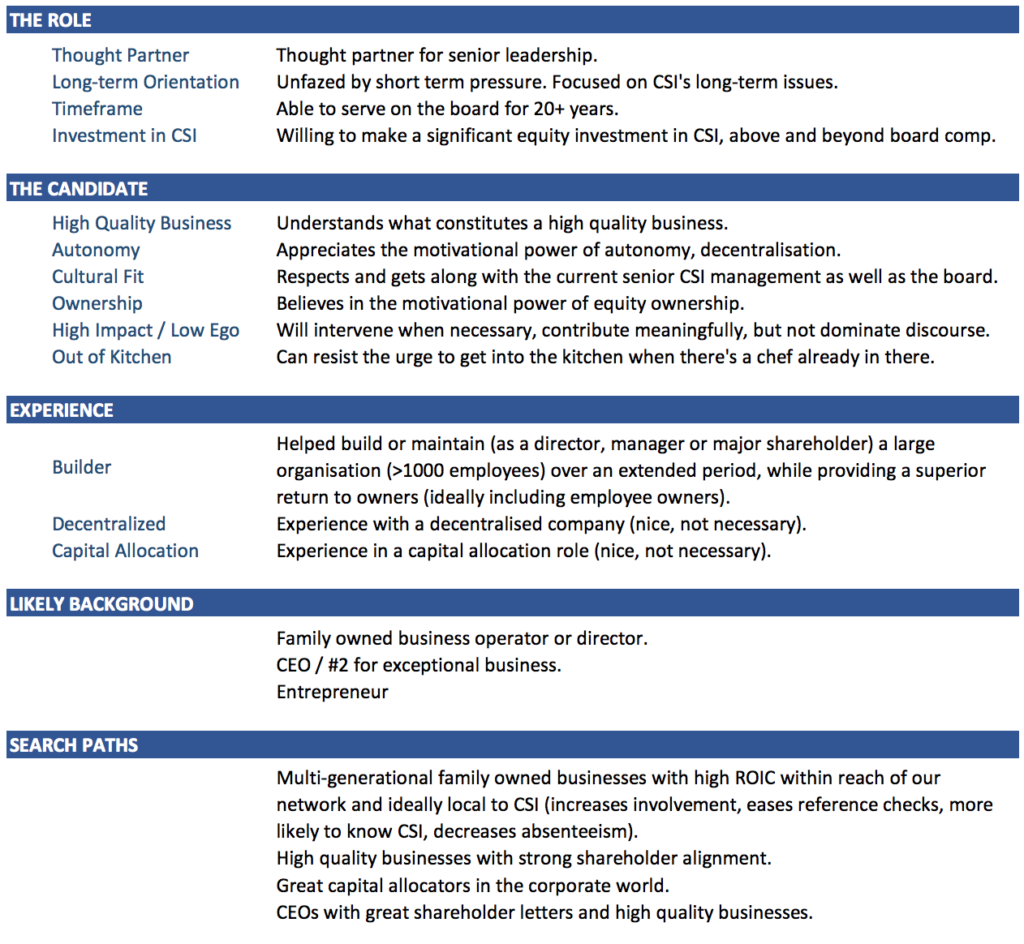 This is Constellation Software’s Letter to Shareholders and is published here: http://www.csisoftware.com/wp-content/uploads/2018/04/Presidents-Letter-April-2018-Final.pdf